When I open a map, I can see icons on the map representing the opencaches in my area (well, not real near my area since there are none.) If I click on one of the icons, I would expect to see details about that cache. All I see is a green box drawn around it, and then nothing. I tried this both in firefox and chrome; I'm using Ubuntu if that makes a difference.

Should this do something?
Top

I'm running Lubuntu Linux and the maps work for me.
Tried on Maxthon and Firefox browsers. Each time I click the icon I see the green box you mentioned then the information box opens for the cache.
Clicking slowly (click, pause, release) made seeing the green box easier as it stayed visible longer.
Top

Normally, you would see a pop up with various information about the cache, including a link to open the full cache page. See attached photo.

What web browser are you using? What version number? 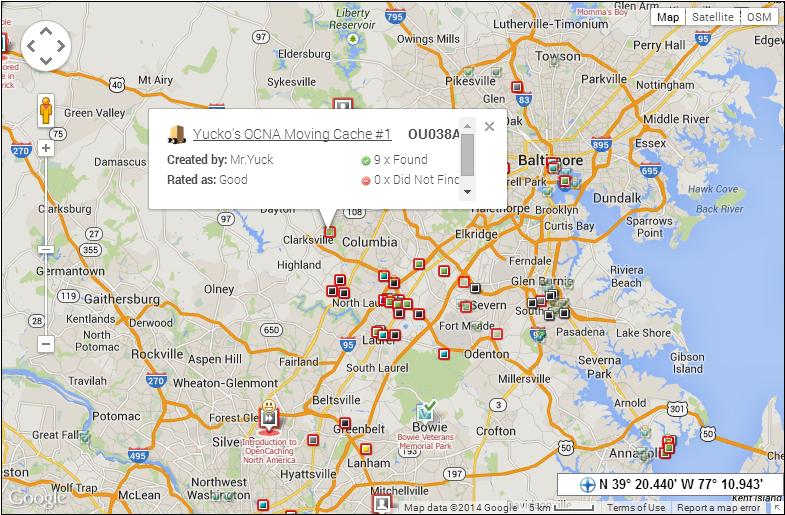 Dave, OCNA Team Member
For the smiles, not the smilies.
Maryland Geocaching Society

chilehead wrote:When I open a map, I can see icons on the map representing the opencaches in my area (well, not real near my area since there are none.)

By the way, the only cache you placed here, I sent two notes that you never published it. Did you receive them? The cache is still sitting in our unpublished que. Long story short, all the European sites (which this is based on), do not review your caches after the first 3, I believe it is, and you then publish them yourself. We *can* publish them with our super secret Admin powers, but that's the way people are used to around here, at least until we do some programming changes and make self publishing optional.

You're not the first, when I came on board about 2 1/2 years after the site was launched, I determined about 7-8% of "accepted" caches were never published by their owners. (I think they have a status of "6" in the database). Of course we then contacted most/all of them.

Any update on this map issue on your end?